In March of 2010 I was fortunate to be able to go to Frankfurt, Germany, to display my aged finishes at the Musikmesse exhibit. My good friend Drew Berlin manages the Hollywood Vintage store and he has the enviable job of being curator of two iconic stratocasters: Eric Clapton’s “Blackie” and Stevie Ray Vaughn’s “Lenny”. Here are pictures of a proud Drew and a seriously jet lagged Gord with the two guitars. I’ve collected Beatles memorabilia for many years…the third picture is my 1964 George Harrison US customs form that I displayed in a rock memorabilia display…along with Beatles and Jimi Hendrix Experience autographs. 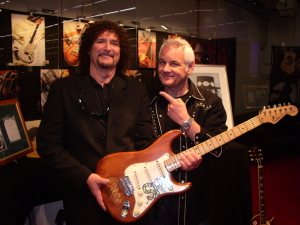 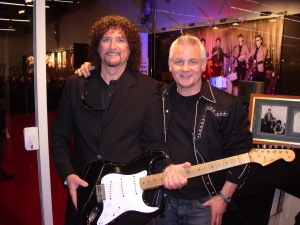 One of my burst conversions ended up over in Germany…here’s Joe Bonamassa taking a spin on it during soundcheck in Berlin.
How come it never sounded that good when I played it??? 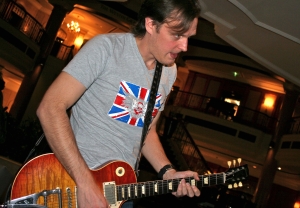